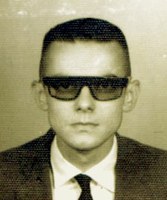 Franz was born on 18th May 1942, in Barra do Piraí, a city of Rio de Janeiro State. He went to Jacarei, in 1960 decade, in order to continue his studies, where he was living with his relatives.

In 1964, he entered the Course of Law, of the Fundation "Valeparaibana de Ensino."

He was a bright lawer and dreamt with the priesthood.

In 1975, he entered in APAC (Association for the Protection and Assistence to the Convicts), where he dedicated to the contact and help to the prisioners.

He was killed on 14th February 1981, in a rebellion of prisioners at the Jacareí Jail - São Paulo State.

Targeted for a firefight, he died together with five rebels and a policeman.