With the support of many volunteers the APAC of Caratinga Town, Minas Gerais Brazilian state, is starting another class of the program The Journey of the Prisoner in closed and semi-open regimes. FBAC wishes that the gifts of the Holy Spirit fill the hearts of everyone who will make this journey with Christ and become true disciples of God. We are together! 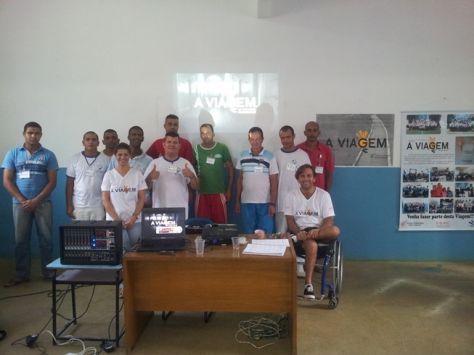 54 recuperandos were certified in the APAC of Pirapora

On 1st April 2016, 54 recuperandos received the Certificate of Completion of The Program The Journey of the Prisoner. FBAC is very pleased with this news and encourages all APACs to make this program a reality for all recuperandos. With God's grace, the program also will be extended to all prisons in Brazil. We are together! 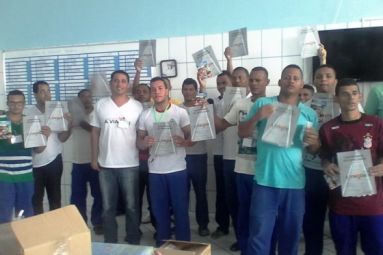 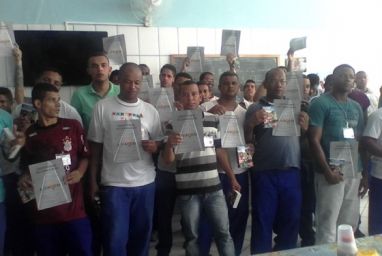 The program The Journey of the Prisoner is an unique opportunity for the recuperandos to deepen the Word of God and the Called of God in their lives. Twenty-eight APACs already implemented the program and are giving this opportunity to the recuperandos. You may follow the activities en the FBAC web site and also send news. We are together!

The last Thursday, 27th August, the APAC of São João Del Rei received the visit of the Coordinator of the Program The Prisioner´s Journey, Mr. Eduardo Henrique. He  trained 13 new facilitadores of the Program. The initiative took place because of the high number of recuperandos present in this APAC. Without the training of new leaders, would be impossible conclude the program with all the recuperandos by the end of the year.  It was a wonderful time of spirituality and confraternazation, where all could contribute to deepen the study of Mark´s Gospel. 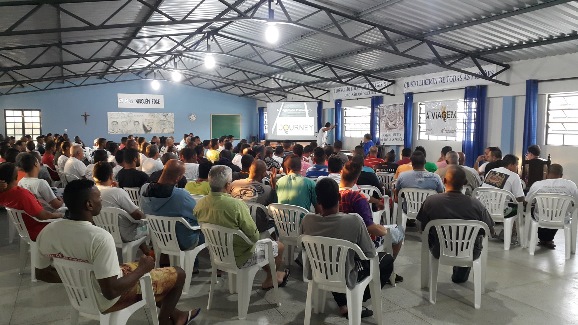 On may 5 and 6, was held the first training for the course "The Prisoner's Journey, on the male APAC in Itauna.
The Prisoner's Journey is a program developed by the Ministry Christianity Explored and the Prison Fellowship International, adapted to prisons around the world.
Brazil was one of the four South American countries chosen to get the project, being a strong ministry, in growth, and fertile ground to sow the word of God.
This program is based on the Gospel of Mark, and aims to invite all participants to meet and have a more intimate relationship with Christ, revealing questions such as: Who is He? Why did he come? What does it mean to follow him.
As was the training, the course is taught in a simply and dynamic way, so that it can be replicated in all APAC operating in Brazil.
For this training, we invited 23 APACs of Minas Gerais, between volunteers and rehabilitees, plus the FBAC's team, totaling about 70 people. The next training will reach the other APACs of Minas that are further away from Itaúna, and also those which work outside the Minas Gerais state.
Stephen W. James - General Coordinator of the program, which has gone through several countries of the African continent, European, American and Oceania, was the facilitator.
On the first day of training, Stephen (who is English, had the help of two translators who are part of the FBAC's team) demonstrated the importance and program metrics, the importance of gospel study, the impact on the lives of the participants, and held a practice session as a demonstration.
On the second day of training, the program coordinator for FBAC, Denio Marques, and other exhibitors, talked and discussed regarding the application, planning, requirements, particularities of APACs and so many other issues raised to the successfull of the application of the course.
The goal is that by the end of the year, several courses are being applied and replicated in all 46 APACs of Brazil, reaching about 3,000 rehabilitees.